Cary Peñate was recently selected for one of the prestigious Emerging Voice Fellowships for the 2021-22 year. It comes following the completion of her doctoral degree in musicology from the Butler School of Music earlier this year.

Now in its second year, the fellowship from the American Council of Learned Societies aims to provide recent postdoctoral students with research and teaching opportunities amidst a difficult higher education job market caused by the pandemic. Peñate is paired with the University of California, Davis, where she will conduct her research and teach musicology related courses. 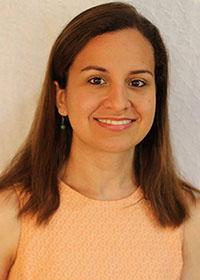 Peñate’s dissertation, titled "Rum, Tobacco, Dance and Music: The Cuban Mulata in Twentieth Century Cinema of the Americas," focuses on depictions of female mulatas (mixed-race female protagonists) and other Hispanics in mid-20th century film productions from Cuba, Mexico, and the United States. The representation of the female mulata is an important historical character in Cuban culture, Peñate explained, particularly during the 19th century wars for independence with Spain as Cubans fought to establish their own unique identity.

“So they create this citizen that is not quite like the Spaniard who is white, but also not black,” Peñate said. The character was prominent in Cuban novels, depicted on rum and cigarette packages, and shows up in theatre and film, too. She was often paired in films with traditional Cuban music like rumba, mambo and cha-cha-cha, but the character’s physical appearance is often white instead of mulata, particularly in international films.

“I believe that the changing representations of the mulata in different nations, genres and historical moments reveal how she has served distinct purposes in Cuba, Mexico, and the United States. I examine mulatez as a physical characteristic of mixed-race figures within Cuban culture to its metaphorical representation by a range of Latina characters in the Mexican and Hollywood film industries,” Peñate said.

Peñate said her interest in Cuban culture stems from her upbringing in Miami, where she was raised by Cuban-born parents. Peñate took up piano and immersed herself in both Latin and classical music as a child, and after achieving a bachelor’s degree in music education, she pursued a master’s in musicology from the University of Miami. There she wrote her thesis on Marco Rizo, a 20th century Cuban-born pianist, composer and arranger who produced music for the I Love Lucy show in the 1950’s.

That sparked her interest in film, so Peñate decided to pursue a doctorate degree at the Butler School under Ethnomusicology Professor Robin D. Moore. She also learned from Professor of Music Theory James Buhler and Associate Professor of Musicology Hannah Lewis, who specialize in music for film and other media.

Moore said Peñate was an outstanding student with an exceptional work ethic. “Cary was very focused and disciplined, she made constant progress on her research, and she is truly passionate about Cuban film music and cultural history,” he said.