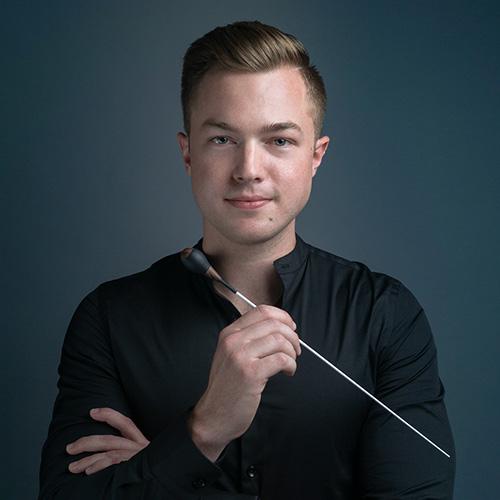 Drew Eary is currently pursuing the Doctor of Musical Arts degree in Wind Band Conducting at The University of Texas at Austin studying under Professor Jerry Junkin where he assists with all areas of The University of Texas band program. Eary holds a Master of Music in Wind Band Conducting from the Schwob School of Music at Columbus State University where he studied with Dr. Jamie L. Nix. He also received a Bachelor of Music in Music Education and Clarinet Performance from The University of Arizona where he served as Drum Major of the Pride of Arizona Marching Band and principal clarinet of the UA Wind Ensemble. While at Columbus State University, Eary’s primary responsibilities were to guest conduct the Schwob Wind Ensemble and Schwob Wind Orchestra. He was the director of the CSU Cougar Pep Band and assisted the annual CSU Conductors’ Workshop. Prior to beginning his MM, Eary was the first Director of Bands at Casteel High School (Queen Creek, Arizona).

Eary has appeared as a guest conductor with the United State Army Band “Pershing’s Own” and was a Conducting Fellow for the H. Robert Reynolds Conducting Institute at the 75th Annual Midwest Clinic in Chicago, Illinois. Eary was also named a finalist for the 2021 American Prize in Conducting. He has presented at the annual Arizona Music Educators’ Association In-Service Conference and was named an ‘Educator to Watch’ by the Arizona Republic Newspaper in September of 2018. Eary is a former board member with the Arizona Marching Band Association and is an active educator and clinician with the George N. Parks Drum Major Academy. He is an alumnus of Kappa Kappa Psi and Phi Mu Alpha Sinfonia.

Bachelor of Music
The University of Arizona