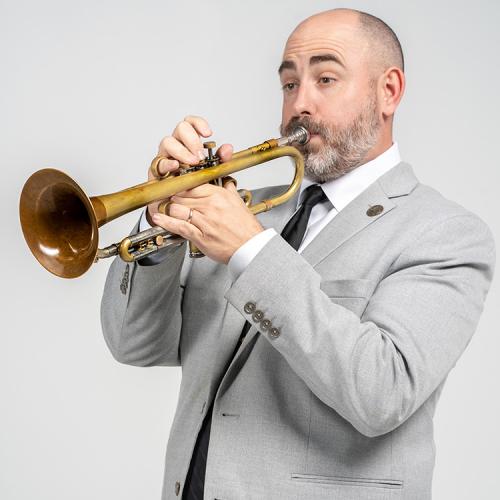 Professor of Practice in Jazz Trumpet

Dr. Mike Sailors is a critically acclaimed Trumpeter, Valve Trombonist, Arranger, Composer and Educator who has toured the world, both as a leader and a sideman. He has performed at the Newport Jazz Festival, the EFG London Jazz Festival, the Tokyo Blue Note Jazz Festival, the Ravinia Music Festival the NYC Winter Jazz Fest, and many more festivals and concert halls/spaces.

Currently, he is a member of the GRAMMY nominated Multiverse Big Band, led by Bobby Sanabria. Locally, he leads his own small and large projects that feature his arrangements and compositions in Texas' various jazz and concert establishments.

He also is a Copyist and Editor for the Jazz at Lincoln Orchestra led by Wynton Marsalis, The Essentially Ellington High School Jazz Competition and a former Copyist and Editor for The Afro Latin Jazz Orchestra led by Arturo O’Farrill. Sailors also will become a published author in the Fall of 2022 when his book “An Analysis of 8 Solos performed by Kenny Dorham” is published via QPress.

Deeply committed to education, Sailors has presented masterclasses and workshops throughout the United States as part of Jazz at Lincoln Center’s “Let Freedom Swing” program, as well as throughout NYC’s five boroughs. In addition to his work with JALC, Sailors frequently appears as a guest artist with College and High School jazz programs, most recently with the Flint Center for the Performing Arts and Lethbridge College in Lethbridge, Canada.

The Hot Sardines review
The Guardian

Bachelor of Music
University of North Carolina at Greensboro