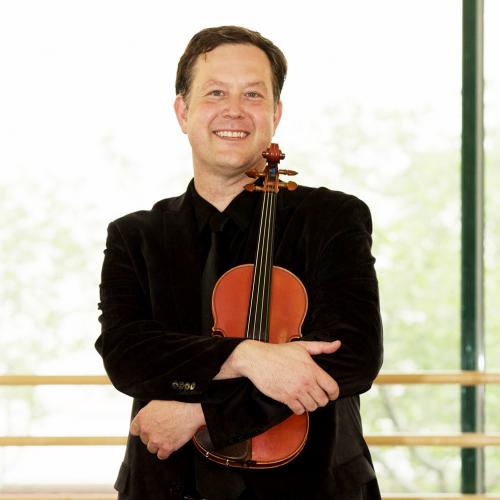 One of the most versatile violinists on the current scene, Brian Lewis is an exceptionally gifted and charismatic artist. "There are a lot of fine violinists on the concert stage today, but few can match Lewis for an honest virtuosity that supremely serves the music,” reports the Topeka Capital-Journal. Much sought after as a performer and teacher, Mr. Lewis concertizes and teaches around the globe, and is dedicated to growing the legacy of Shin’ichi Suzuki and Dorothy DeLay. Acclaimed performances include concerto debuts in both New York's Carnegie Hall and Avery Fisher Hall, as well as performances with the Orchestra of St. Luke’s, the Berlin (Germany), Louisiana, Kansas City, Hartford, Syracuse, Odense (Denmark), Lima (Peru), Boulder, Guadalajara (Mexico), Sinfonia Toronto (Canada), ROCO and American Symphony orchestras, among many others.   He has released six CDs, including as soloist with the London Symphony Orchestra of music by Leonard Bernstein and Hollywood composer Michael McLean for the Delos Label.

Mr. Lewis began his violin studies at the age of four, participating in the Ottawa Suzuki Strings program, and traveling to Japan twice to study with Dr. Suzuki. He received his Bachelor and Master degrees from The Juilliard School, studying with the renowned pedagogue, Dorothy DeLay. Mr. Lewis holds the David and Mary Winton Green Chair in String Performance and Pedagogy at The University of Texas at Austin. In addition, he is Artistic Director of the Starling-DeLay Symposium on Violin Studies at The Juilliard School in New York City, Artistic Director and Faculty and the Brian Lewis Young Artists Program held most recently in Fairbanks, AK. He has also recently held positions as the Class of ’57 Visiting Professor of Music at Yale University and Visiting Professor at the Cleveland Institute of Music.

Master of Music
The Julliard School

Bachelor of Music
The Julliard School